Before you is a half-elf who walks as though he flows like water. His robes ripple in waves as he moves about. The sound of small bones clanging together can be heard with each motion he makes. Around his neck is a glass vial of water. You can tell through his eyes that compassion is in his heart. He bears no weapons. Rumors have it he is a giver of life. The water he gives heals the wounded and revitalizes the sick. Haaku, priest of water and formerly of the Uaari Clan.

Haaku was born of a small elf tribe known as the Uaari Clan. When he came out he was quite the shock to most of the tribe. The father was unknown to most, but obviously a human. His mother was Enala, one of the fiercest warriors of the Uaari. One would think that with such a strong and talented fighter for a mother, that Haaku would grow up in her footsteps. That is not the case. He was often treated as an animal among the others, and even treated poorly by his own mother. He grew to hate the savage and violent lifestyle of his raider relatives. He became convinced that tough the world was a harsh and violent place it was not necessary to behave as such.

His tribe grew tired of him and once he was old enough to fend for himself, they dumped him in the nearby city-state of Tyr. There he met a water priest who took a liking to Haaku. The priest was named Nahla. Haaku listened to Nahla and her stories of a world once covered in oceans. He also saw her compassion for those in need of life giving water, and passionate hatred for the defilers that destroyed it. “Only a defiler can truly destroy water, and we must set out to preserve it at all costs.”

After some time, Haaku decided it was his time to become an elemental priest of water as well. Nahla and Haaku traveled north to Lake Pit. The journey was arduous but they finally made it. Nahla explained to the druid that protected the area that Haaku sought to make a pact with the water elemental. So began his initiation.

Nahla cast a spell on Haaku that allowed him to make his way to the bottom of the lake. He spent the entire night being tested by the elemental that resided in the lake. It found him to be worthy, and gave him his mission. Heal those in need, purify all water that is tainted, and stand up against those who defile. He made his way back to the surface where Nahla was waiting for him with a glass vial containing water from the lake. This represented the pact he made with the element and was to be an aid in his mission.

Haaku has managed to make his way back to Tyr, while Nahla has departed to fulfill her mission. Recently he was collected by templars and their henchmen and sent to work on Kalak’s ziggurat. 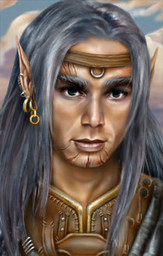