(ig)Nobel man that likes to gamble.

Marc’s great-great-great-great-great-great-great-great-grandfather was, according to family lore, a high noble man in Tyre of great psyonic power. Family lore states that he was the last of the great gamblers of house HassleHuff, who every other generation bear a son with the penchant for risk. That is even how his family started its great fortune through gaming, speculation, and outright dicing. This family ‘curse’ worked well for many generations before his gx9 grand father, the gambling father, being kept in check by a straight laced son, and the gambling son being reigned in by his father. The gambling generation always reaching, sometimes failing sometimes winning greatly, and the austere generation always trudging away at a slow pace keeping each other in check. However, after the afore-mentioned patriarch the family experienced a fairly dramatic down ward trend, that no amount of gambling or austerity could seem to stop. The family fortune and good name avalanching down from the highest of heights, fortunately takes a long time. Marc, is probably the last of his line to hold a noble title. Youngest of 3, his sister currently heads the house, and from a long genetic memory of down fall she has built up a curious mixture of both the gambler and the austere probably bored into her by her father. The middle child vanished when s/he was so young the current generation don’t even seem to remember the sex. Marc, was never in the good graces of ether his father or, as of late, sister. Solely because of the ‘luck’ of loosing a sibling Marc will probably be the last HassleHuff to receive a nobel’s education in psyonics and state craft. After his schooling and a string of incidents, that may have lead to his father’s heart attack, Marc was put out to pasture by his sister and subsequently captured by slavers as he slept in a brothel/inn. 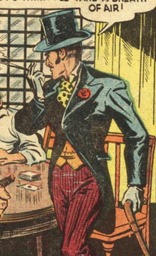