Mina is young, lithe, and highly attractive. She has an air of strength and solidity about her that make her glow with inspiration.

Mina was born in Tyr. Her father is a wealthy merchant, and her grandfather was once a slave in the gladiator arena. Mina’s grandfather won his freedom, and settled down in Tyr. His many battle-scars fascinated her as a child, and the stories of the arena were few but captivating to the young girl. Her grandfather taught her to fight with a long-sword, how to balance it, how to make it dance. More importantly, though, he taught her to care about her history.

Mina was a bright, interested, intelligent child with a captivating vivaciousness that effected everyone around her. She could wrap anyone around her little finger with a quick smile and a flash of laughter. While that level of charm could easily be used to get what she wanted, Mina rarely took advantage of it, and instead used it to cheer her family, friends, and especially the poor and enslaved that she encountered in the streets. Her sense of justice and kindness matched her brilliant smile and her enchanting appearance.

While her father traded goods and built the family’s legacy Mina watched the people of Tyr in the market-place. She watched the nobles spit on and kick their slaves. She watched the Templars ignore one criminal and go after another based only on who had the ceramic to spare. She watched families torn in pieces by the unfair laws of Tyr, and as she grew older and stronger, she grew more and more fed up with the status quo of her home city.

As a young woman Mina couldn’t stand to continue to watch her city and its people be used to satisfy Kalak’s hunger for power. Without a clear path she applied to Merchant House Wavir to be a caravan guard. She quickly showed prowess with the sword, but showed far more worth as the leader of a constantly shifting crew of mercenaries. The hard men would bicker and come to blows, until Mina stepped in with a quick word and a flash of sword and a few moments later the same men would be laughing together about the recent squabble. She kept order, and suffered no disloyalty, but she also inspired any crew to work together for the benefit of all on the caravan. After several years of wandering the desert, protecting someone else’s treasure, she tired of the mercantile and mercenary wanderings. She returned home to Tyr.

The situation in Tyr grew ever more unjust, ever more harsh, ever more violent, and Mina’s patience was finally at an end. She knew something had to be done to save her city. As Kalak neared completion of his Ziggurat she pondered her options. She had, in her wanderings and in her time at home in Tyr, heard many stories of The Veiled Alliance. Although the organization had a terrible reputation, Mina wondered. Anything that the Templars and the Sorcerer King would try so hard to discredit might have worth. She began spending time in the underworld of Tyr. Her attractiveness and charm came in handy while drinking in a tavern, and asking some potentially hazardous questions. After a short time she managed to get an audience with someone who claimed to be part of the mysterious organization. She offered her aid, her strength, her sword, her ability to lead, her charm and her dedication to the Veiled Alliance. She also offered a plan. She had seen the increasing sweeps of the city, citizens collected off the streets of Tyr and taken to work on the Ziggurat. More and more people were disappearing everyday, and Mina thought that perhaps, if she got caught up in one of those sweeps, or otherwise became enslaved, that she could effect new change within the slave pens. Like her grandfather, she believed she could win freedom, but this time, in this newer age, she aimed to win freedom not just for herself, but for the entire city of Tyr. 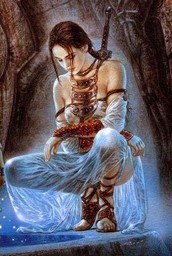